The Lacanian compass : Clinical Study days #6, The psychoanalytical act in the 21th century

The Clinical Study Days is the annual meeting presented by the Lacanian Compass.

While each Study Days is dedicated to a particular subject, its feature presentations and discussions of clinical case work are done by psychoanalysts and other clinicians sharing the Lacanian approach. The papers presented will involve institutional and private settings.

The Study Days are open to anyone interested in psychoanalysis.

“An act,” Jacques Lacan declared on January 10, 1968, in reference to the Psychoanalytic Act, “is linked in the determination 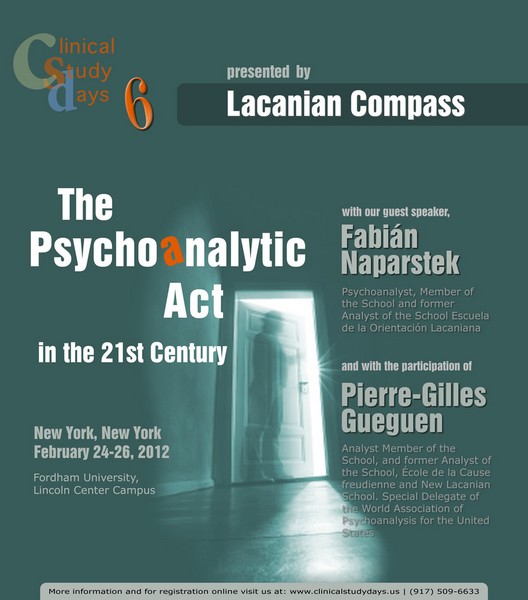 For our next Clinical Study Days, we will explore the status of the Psychoanalytic Act in the 21st Century. The Symbolic Order has changed today, even from the moment of the Seminar of Lacan on the Psychoanalytic Act in 1968. The transference that appeared to Freud closely linked to parental, even paternal, imagos, in part because the Symbolic Order at that moment was closely structured by the Signifier of the Name-of-the-Father, is seen less and less today. At this moment today, where the Symbolic Order is no longer what it used to be, to take the title of our upcoming Congress of the WAP, the signifier of the Name-of-the-Father no longer functions in the same way, which has implications for the possible paths in the establishment of the transference. If, as Lacan spoke on November 29, 1967, “this psychoanalytic act is something that is quite essentially linked to the functioning of the transference,” what precisely has changed about the transference, or the paths to the establishment of the transference, in today’s world? How do analsants today reach the point of the beginning of an analysis? And, taken from the perspective of the analyst: in what ways has this new Symbolic Order created a situation that requires a different Direction of the Treatment? Is it necessary for the psychoanalyst to create new strategies with regard to the transference in the face of this new Symbolic Order? What is the place of interpretation today in light of this? And what, for our psychoanalytic institutions, is necessary to sustain a place for psychoanalytic discourse in today’s world? In order for our Schools to facilitate the very passage of an analysant to an analyst, what consequences are there with regard to formation that we are facing in the 21st Century? These are some of the questions that we raise for our consideration of “The Psychoanalytic Act in the 21st Century.” http://clinicalstudydays.us/index.htm